A few days ago my wife and I, together with many friends from my own parish, visited another church in my vicinity.  The church was packed with about two thousand people who came from different parishes from all over Toronto and the neighboring cities.  It was a once-in-a-lifetime occasion.  Many saints in heaven and many Catholics on earth converged at St. Patrick Church in Markham, Ontario, on March 5, 2012.

There was recently a Catholic activity called Expositions of Sacred Relics that took place in some parishes in Toronto, and in some neighboring cities as well.  It was said that there were 160 relics.  I touched many of them with my Rosary.  The most prominent of them include: a piece of the True Cross of the Lord; a piece of the lance that was used to pierce through the Sacred Heart; a piece of the crown of thorns that was put on the Lord’s head; and the veil that belonged to Holy Mary.  My Rosary also touched the relics of the ‘celebrities’ such as: St. Joseph, the eleven apostles, St. Paul, St. Thomas Aquinas, St. Dominic, St. Augustine, St. Teresa of Avila, St. Faustina, etc.  There were too many to be mentioned. 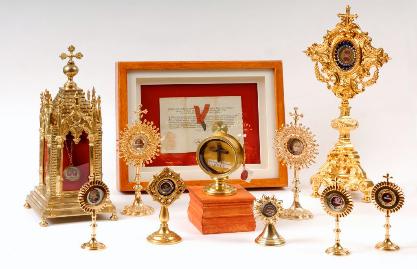 Among all the saints who are already living in heaven, I wonder if we know only about ten percent of them.  Many of them are not well known, or have never been heard of by the modern man.  While the central truths of the Catholic faith consist of the Holy Trinity, the Incarnation, the Death and Resurrection of Christ, the Church has never put aside the doctrine of the Communion of Saints.  The All Saints Day is a solemn celebration.  We enjoy a real but invisible fellowship and friendship with these saints.

We need the saints, canonized or non-canonized, not only because they are powerful intercessors who pray for us, but to stand out as living proofs that God exists.  They were ordinary people who chose to follow the teaching of God with the help from the grace of God.  I saw the relics of St. Thomas More who lost his life because he put God above King Henry VIII; St. Thomas Becket who demonstrated more loyalty to the Church than to his king; St. Thomas Aquinas who was the Church’s greatest theologian; St. Augustine whose book Confessions touched the whole world; St. Monica, mother of St. Augustine, who prayed daily for her son’s conversion for about thirty years; the Good Thief who was nailed on the cross next to Jesus and who repented a short time before he died; St. Maria Goretti who chose to forgive the man who killed her, and I saw the dagger which was used to kill her, and many more.

We need these heroes in heaven to remind us that the two greatest commandments are indeed possible.

Although some saints seem to be very unreal to us, not all of them could perform miracles, or were lifted off the ground when praying, or had stigmata. In fact, they were just as human as we are.  They also had their faults, their doubts, and their struggles.  They managed to overcome these difficulties to achieve an incredible height of selfless love by cooperating with God’s graces in extraordinary ways.  The priest in charge of the Expositions shared with us the story of St. Maria Goretti who chose to forgive the man who killed her.  She forgave her neighbor, the man who attempted to take her virginity and consequently killed her, until it hurt, until she did not have any more life to forgive him.  The dagger which was used to kill her sent her to heaven and helped her become a canonized martyr.

St. John said the saints were a huge crowd from every nation, race, people and tongue. ( Revelation 7: 9 )  They were from all walks of life.  Some of them were educated, some illiterate.  Some were powerful, some powerless.  Some were rich, some poor.  After their hard work on earth, they are now at rest in heaven, but still they are at work.  They pray for us constantly that we may one day join them in heaven.

Not only do they pray for us that we may one day join them, they also pray for our well being here on earth.  Many people who attended the Expositions hoped that these saints would intercede for them to have their physical health restored.

The morning after the Expositions I woke up early as usual.  Instead of praying my daily Rosary, I was lying on the couch suffering from some discomfort in my abdomen.  I had been suffering from the same discomfort for a week prior to the Expositions.  While I was lying on the couch, I remembered I was holding my Rosary which had come into contact with the relics of many saints the night before.  I then put the Rosary on my abdomen for a few minutes, and asked the saints that my Rosary had contacted with to help me.  I stood up and started walking after a few minutes.  The discomfort disappeared completely.

I knew that the relics themselves did not heal me.  It was God who healed me through the relics by answering the saints’ prayers.  If there is anyone who thinks our veneration of the saints is unnecessary or wrong, or who doubts the Church’s doctrine of the Communion of Saints, I would be more than happy to share my experience.

Let us pray that one day we will also be powerful to intercede for others when we can see God in heaven because it is our duty to become a saint.  Jesus said, “In a word, you must be perfect as your heavenly Father is perfect.”  ( Matthew 5:48 )