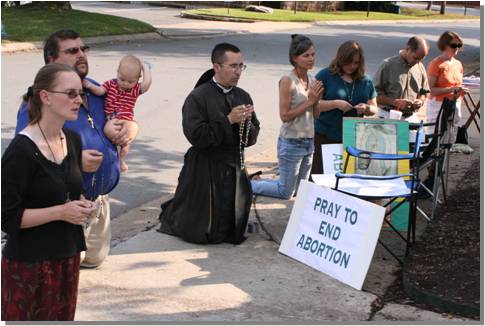 I was invited to participate in the 40 Days for Life pro-life campaign in March.  There were volunteers from 170 cities across North America participating in this campaign.  This year in 2012, the campaign started from February 22 to April 1.  The vision of this campaign is to access God’s power through prayer, fasting, and peaceful vigil to end abortion in North America.  On the 40 Days for Life’s official website, I learned about the amazing fact that thanks to the prayers and fasting of the volunteers, 2168 unborn babies have been spared from abortion, and those are just the ones that have been recorded.  In addition to this, 26 abortion workers have quit their jobs and walked away from the abortion industry.

I had a one-week holiday in March.  On one of these days I went volunteering for the 40 Days for Life Campaign.  I was asked to stand one hour across the street from a clinic called ‘Women’s Care Clinic’ where abortions take place.  Ironically, there is a Catholic church across the street from the clinic.  The volunteers stood next to the church’s parking lot holding signs that say ‘Abortion Stops a Beating Heart’ and ‘Pray to End Abortion’.  Carrying the ‘Abortion Stops a Beating Heart’ sign, I joined the other volunteers.  There were ten volunteers including me.  There was no verbal communication among us.  We were holding our signs and praying the Rosary for the ending of abortion silently.  Many cars were moving on the busy street.  About 10% of the drivers honked to give us support.  There was one particular woman driver, on the other side of the street, who lowered her window to jeer at us and give us a thumbs down.  I looked at her and complained to the Lord in my mind.  “Look!  This woman is mocking us.  Lord, don’t you care?” 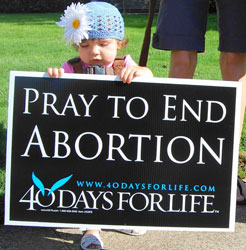 hat was definitely not the first time God was complained to.  Over three thousand years ago, a group of slaves who had escaped from Egypt were wandering in the wilderness in the Sinai Peninsula.  They grumbled against God and complained to their leader that there was no food and water.  Furthermore, they said they were tired of the food from heaven called manna.  As a result of their complaint, God sent poisonous snakes among them.  Many were bitten and died.  Then they came back to their senses and went to see their leader in desperation.  “We have sinned.  Please ask God to take these snakes away.”  God then asked Moses, their leader, to make a bronze serpent and mounted it on a pole.  Anyone who had been bitten by a snake looked at the mounted serpent was healed.  (Numbers 21: 4 – 9)

Many centuries later, Jesus made a prediction.  “As Moses lifted up the bronze snake on a pole in the desert, in the same way the Son of Man must be lifted up, so that everyone who believes in him may have eternal life.”  (John 3: 14 – 15)

Jesus wished to tell us this: “If you wish to have eternal life, you should look up at me, believe me, follow me, and accept me and everything I stand for.”  The salvation comes from the cross but there is always the proviso that we have to be loyal to our Lord Jesus in all circumstances.

But it is irrefutably true that it is more difficult to be loyal to our Lord Jesus in all circumstances than the Catholics hundreds of years ago.  The modern world that we have created is characterized by modern technology that has bewildered many of us.  However, beneath the lustrous surface of our modern technology is the world fuelled by hatred, violence, greed, fear, selfishness, and is corroded by materialism and atheism.  It is very difficult for people of this century to find the right conditions for experiencing God.

The cross is God’s answer to the world.  It is the answer to the afflictions that we experience every day.  The cross is a symbol of shame, guilt, failure, and weakness but it is the instrument God uses to redeem the world.  St. Paul said, “For what seems to be God’s foolishness is wiser than human wisdom, and what seems to be God’s weakness is stronger than human strength.”  (1 Corinthians 1: 25)

Salvation is not found elsewhere.  Salvation comes from the cross and it requires our complete trust in God and a willingness to do things God’s way.  As Catholics, our challenge is to always look up at the cross and develop the much-desired spiritual minds and faith-filled eyes that can see God’s blessing in the midst of our daily suffering.

Not only can we find salvation from the cross, there are also valuable solutions from the cross that help us tackle our daily trials.  My young friend Catherine has a habit of kneeling two meters from the tabernacle for a short time before she leads the prayer of Divine Mercy and Rosary during the Holy Hour Service at my parish.  She once shared with me that many times when she experiences challenges in her work and when it seems there is no way out, she will kneel down in front of the tabernacle and present the problems to the Lord inside, and somehow there will be solutions that help her solve her problems, and that there is a little cross at the top of the tabernacle.

And why is the cross such a powerful instrument used by God to save the world?  The cross itself is powerless but only one drop of blood from the body of Jesus that was hanging on the Cross has the power to save everyone in the world, from the first person created to the last. 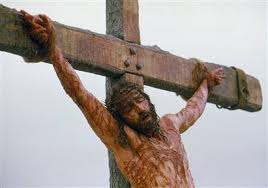 There is a legend that the skull of Adam, the first man created by God, was buried at Golgotha, under the very spot where the Cross was.  The story goes that the blood of Jesus seeped into the ground and covered Adam’s skull.  At the moment when Adam’s skull was touched by the blood of Jesus, Adam’s sin of disobedience and all our sins were forgiven.

The woman driver who gave me a thumbs down when I was praying the Rosary is nowhere to be found.  If I had a chance to see her again, I would say, “Look! Jesus died on the cross to forgive all your sins.  He died for you because He wants to save you.  Don’t you care?”