One Person Plus God Equal an Army

A priest I know always says, “You don’t need to believe what I say, but you should believe what saints said.”

St. Teresa of Avila once said, “One person plus God equal an army.”  According to what the priest says, we should believe what St. Teresa said about the power of just one person and God.

In the Old Testament, Moses is a striking example.  He alone, with the help of God, made King Pharaoh release the Israelites.

Another well known example from the Old Testament is King David.  Before David became the king of the Israelites, he was a young boy from the hills of Judea.  He took on a well armed giant called Goliath.  He alone, with the help of God, defeated this giant.  His story can be found in 1 Samuel 17. 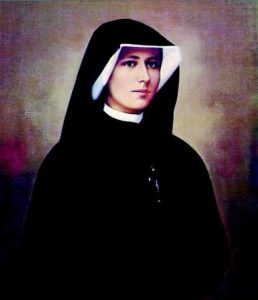 Another example that I can think of is St. Faustina Kowalska.  Her diary was once banned by Pope John XXIII.  The ban stemmed from some theological issues.  For instance, in her diary, St. Faustina claimed that Jesus had promised a complete remission of sin for certain devotional acts, which ran contrary to the views of the Holy Office.  Later it was discovered that there were misunderstandings which were created by a faulty Italian translation of her diary.  When Karol Wojtyla became Pope John Paul II, a new investigation into the life and diary of St. Faustina was launched.  Thanks to St. Faustina’s effort, and with the help of God, the devotion to the Divine Mercy was finally and officially permitted.

Another marvelous example that I can think of is Brother Andre Bessette.  His canonization has been scheduled for Sunday, October 17, 2010.  He was noted for his great reverence and confidence in St.Joseph.  Brother Andre was an exceptionally humble man.  He was credited with thousands of reported miraculous healings but he credited all these healings to St. Joseph.  In 1904, Brother Andre began the construction of a small chapel on the side of the mountain near Notre Dame College in Montreal, Quebec.  The small chapel was enlarged and finally became the largest Catholic church in Canada.  The small chapel, now the Saint Joseph’s Oratory, is dedicated to Saint Joseph, to whom Brother Andre credited all his reported healing miracles.  I have recently finished reading the biography of Brother Andre.  I have learnt that he alone, with the help of God, somehow made the small chapel become the largest Catholic church in North America.

Brother Andre made many people who had been healed by him repent.  It is said that when he died, half of the people who lived in Montreal filed before his open coffin.

A friend of mine has shared with me another interesting story about the power of just one person and God.  The following is the story:

A young soldier found himself in a terrible battle during the Scottish Reformation.  The enemy was soundly defeating this young man’s army.  He and his comrades found themselves hastily retreating from the battle field in defeat, running away in fear of their very lives.  The enemy gave chase.  This young man ran hard and fast, full of fear and desperation, soon found himself cut off from his comrades in arms.

He eventually came upon a rocky ledge containing a cave.  Knowing the enemy was close behind, and that he was exhausted from the chase, he chose to hide inside the cave.  After he crawled in, he fell to his face in the darkness, desperately crying to God to save him and protect him from his enemies.  He also made a bargain with God.  He promised that if God saved him, he would serve Him for the rest of his life.

When he looked up from his despairing plea for help, he saw a spider beginning to weave its web at the entrance to the cave.  As he watched the delicate threads being slowly drawn across the mouth of the cave, the young soldier pondered its irony.  He thought, “I asked God for protection and deliverance, and he sent me a spider instead.  How can a spider save me?”

His heart was hardened, knowing the enemy would soon discover his hiding place and kill him.

And soon he did hear the sound of his enemies, who were now scouring the area looking for those who were hiding.  One soldier with a gun slowly walked up to the cave’s entrance.  As the young man crouched in the darkness, hoping to surprise the enemy in a last-minute desperate attempt to save his own life, he felt his heart pounding wildly out of control.

As the enemy cautiously moved forward to enter the cave, he came upon the spider’s web, which by now was completely strung across the opening.  He backed away and called out to a comrade, “There can’t be anyone in here.  They would have had to break this spider’s web to enter the cave.  Let’s move on.”

Years later, this young man, who made good his promise by becoming a preacher and evangelist, wrote about that ordeal.  He wrote: