Because the early Christians who were faithful witnesses to their faith were persecuted, so gradually the meaning of the word ‘martyr’ has changed to ‘a person who is persecuted for his religious faith’. 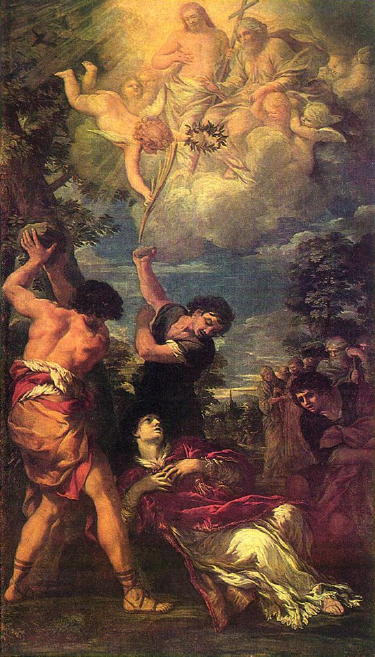 St. Stephen was the first martyr who was a witness unto death.  ‘As the members of the Council listened to Stephen, they became furious and ground their teeth at him in anger. But Stephen, full of the Holy Spirit, looked up to heaven and saw God’s glory and Jesus standing at the right-hand side of God.  “Look!” he said. “I see heaven opened and the Son of Man standing at the right-hand side of God!”  With a loud cry the members of the Council covered their ears with their hands.  Then they all rushed at him at once, threw him out of the city, and stoned him.  The witnesses left their cloaks in the care of a young man named Saul.  They kept on stoning Stephen as he called out to the Lord, “Lord Jesus, receive my spirit!”  He knelt down and cried out in a loud voice, “Lord! Do not remember this sin against them!”  He said this and died.’  (Acts 7: 54- 60)

Stephen’s death led to the first persecution of the Church.  As more and more people were baptized and followed the teaching of Jesus, the Romans began to persecute Christians.  Some emperors were especially cruel, and executed those who refused to worship the pagan gods.  Due to the Roman persecution, the early Christians gathered together to celebrate the Eucharist in secret underground shelters called catacombs.

In the year 313, something of great importance happened in the history of the Catholic Church.  The Roman emperor, Constantine, was converted to Christianity.  After his conversion, it was no longer against the law to be a Christian.

Christianity spread across Europe so quickly that by the year 1000, most of western Europe was Christian.  People used the word Christendom to describe Europe at that time.  It was a land that shared the same faith, same religious practices, and same ideas about right and wrong.

Although Christianity spread quickly across Europe, the age of the martyrs is still not yet over.  Archbishop Oscar Romero was one of the most well known martyrs in the last century.  He always spoke out on behalf of the poor and victims of the Salvadoran civil war.  He was assassinated when he had finished giving his homily one day in 1980.  I remember watching a movie about him on television.  Father Maximilian Kolbe was another well known martyr who willingly died for a fellow inmate in a concentration camp in the last century.  Archbishop Dominic Tang, the rightful bishop of Guangzhou China who happened to know my own mother, spent twenty two years in a Chinese Communist jail.  In the 1950’s, many priests in China who refused to betray the Church were sent to jail for years.  I personally know some of them who were released after spending many years in jail.  Faithful Christians today are still being persecuted in one way or another.

But all Christians are called to be martyrs in the original meaning of the word.  We are called to be witnesses to our contemporaries who either do not know anything about the Catholic faith or belittle it.  Most of us will very likely be bloodless martyrs, but real martyrs nevertheless.

St. Paul thought that daily martyrdom was a part of the Christian way of life.  To think otherwise is to have a mistaken view of Christian life.  After all, we profess to follow a man who was nailed to a cross.  ‘To this very moment we go hungry and thirsty; we are clothed in rags; we are beaten; we wander from place to place; we wear ourselves out with hard work.  When we are cursed, we bless; when we are persecuted, we endure; when we are insulted, we answer with kind words.  We are no more than this world’s refuse; we are the scum of the earth to this very moment!’  ( 1 Corinthians 4: 11 – 13 )

Most of the faithful Christians today are silent martyrs.  We will unlikely be hanged on a cross of wood, but on a cross of pain, frustration, anxiety, poverty, disappointment, and on the daily struggles at home, and at the office.

The question that was put to our ancestors in faith in the first, second, and third centuries was, ‘Are you a Christian?’  They would be persecuted if the answer was positive.  The question that we should ask ourselves today is, ‘If there were a religious persecution today, would there be enough evidence to convict me of being a Christian?  If not, why not?’

To be convicted of being a Christian in the 21st century in Canada is not the same as ‘Am I a modern martyr willing to die for Christ?’, but rather ‘Am I willing to live for Christ, for His Church, for my fellow brothers and sisters?  Am I ready to be in contradiction with the unchristian ways of life?  Do other people see God’s light shining through me in this world where the darkness of atheism is prevalent?’

The blood of the martyrs has been and will continue to be the seed of Christians.   The Church will continue to grow.  Modern martyrs will be like Stephen, the first martyr of the Church, and receive the crown of everlasting life.  The name ‘Stephen’ is of Greek origin and it means ‘the crown’.

Worldly-minded people will one day say reluctantly about these modern martyrs, ‘This is he whom once we held as a laughingstock and as a type for mockery, fools that we were!  His life we accounted madness, and his death dishonoured.  See how he is accounted among the sons of God; how his lot is with the saints!’  ( Wisdom 5: 3 – 5 )