The Salmon, the Prodigal Son, and the Saints

Many years ago I read an article that got my attention. From that article, I learned about an inexplicable phenomenon about salmon. After a salmon is spawned, it will swim into the ocean, and after an extended period of time something strange happens inside the brain of the salmon. It will have an overwhelming urge to return to the place where it was spawned. The salmon will swim along the coast, find the right harbour, the right river, the right stream; and finally it will get back to the very spot where it started its life. There was no explanation in the article how a salmon can find the right spot where it was spawned.

A few days ago, I had an opportunity to read about an interesting experiment related to the fact that salmon somehow can mysteriously return to the very spot they were spawned. 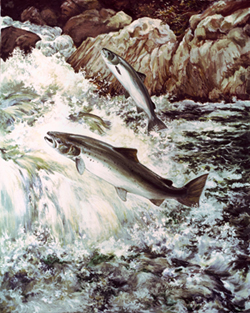 I was dumbfounded by this mysterious guidance system of the salmon. A salmon somehow knows that it needs to return to the spot where it was spawned. And somehow God has provided such a marvellous guidance system for a fish so that it always succeeds in finding the very spot where the egg was laid at the very beginning of its life.

The inexplicable phenomenon of the salmon returning to the spot where the egg was laid reminds me of the parable of the prodigal son. ( Luke: 15: 11 – 32 )

When we talk about the parable of the prodigal son, we always talk about the merciful father who represents the forgiving God who is always ready to forgive us.

There are, however, two facts about the parable that have sometimes been overlooked. First, we tend to forget about God when we are wealthy in our worldly treasures. The younger son in this parable sold his part of the property, went to a country far away where he wasted his money in reckless living. He spent everything he had. He forgot about his father when he was spending all his money. Second, we tend to remember God when we are in hardships. In this parable, when there was a severe famine that spread over the country, the prodigal son lost everything. At last he came to his senses and said to himself, “All my father’s hired workers have more than they can eat, and I am about to starve! I will get up and go to my father and say, Father, I have sinned against God and against you.” 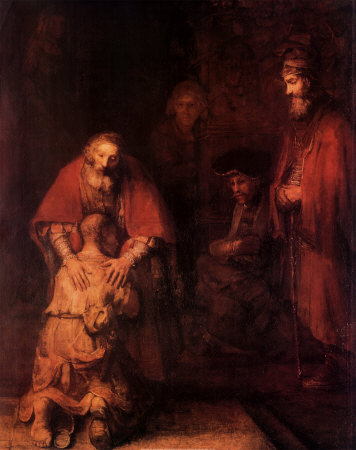 We are far more important to God than salmon. We are created in God’s own image. God knows we need His wise and loving guidance as we try to find our way through the jungle of this world. He has personally promised His guidance. He sent His only Son to guide us back to Him.

People with faith see this world as a specially-designed house. People living inside this house can not see anything outside while people outside can see what is inside. God, the angels, and the saints can see what the people in this world are doing. On the other hand, while we have heard about God, the angels, and the saints but we can not see them when we are still living in this world. Since we can not see them, some people refuse to believe in them and act like God does not exist. 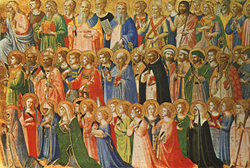 Saints are different. While they were still living in this world, they were indifferent to the worldly attractions. Though they could not see God, the angels, and the saints, they acted as if they could see them and these yet-to-be-canonized saints were more interested in joining the saints who had gone before them than in what this world offered. While still living in this world, they already knew that the sole purpose of their existence was to return to God. To achieve this end, they would love God with all their mind, their soul, their strength, and love their neighbours as themselves. They could not find complete satisfaction before they returned to God, in whose image they were created, and from whom their life came.