This article was written on the first day of 2010.  As we look back at 2009, at the history of the world, some of us may wonder, with so many negative events that have been besetting us, where is the history of this world going?

At the end of 2009, the well known Chinese dissident Liu Xiaobo was sentenced to eleven years on Christmas day.  He was guilty of advocating human rights, free speech and an end to one-party rule.  These are values that we have taken for granted in most parts of the world.  The climate summit in Copenhagen has closed.  Many countries admit the deal falls short of the action needed to tackle global warming.  The pandemic H1N1 swine flu is still threatening mankind.  Airlines operating flights to USA began to implement tighter security measures, following a foiled terror attack on a flight from Amsterdam to Detroit.  In our society, the homeless still shiver in the cold, and the poor still suffer from hunger.  In 2009, each of us had his or her own cross to take.  The list is endless.

For atheists, it therefore seems logical to conclude that God is not in charge, or perhaps God does not exist at all.  The challenge to us as Christians, however, is to believe that there is a merciful God who has a blueprint of our salvation.  His plan is to bring all of us back to Him, even when it seems there is no purpose in our history.

There is a purposeful view of history.  All through the Old Testament, we read how God moved the history of the Jewish people forward in a meaningful way.  The well known story of Joseph, Jacob’s favourite son, is a good example.  He was sold by his jealous brothers to Egypt as a slave.  When Joseph arrived in Egypt, it must have been difficult for him to understand the meaning, if there was any, of his own tragic experience.  However, he eventually became second-in-command to the Pharaoh in Egypt.  When his brothers came to Egypt to buy food during a great famine, they were shocked to find their own brother Joseph was in charge of the land of Egypt.  They apologized to him for their wicked deed, but Joseph said, “Even though you meant harm to me, God meant it for good, to achieve his present end, the survival of many people.” (Genesis 50:20)  Joseph was finally able to see God’s merciful plan, even in his own tragic personal experience.

Hindsight is always 20/20.  With the help of the teaching of the Church, today we know the Old Testament was a preparation.  It was a preparation of the coming of the Saviour.  Nevertheless, at times it must have been hard for the Jews who lived before Christ to sense any purpose in their lives.  As it was difficult for Joseph to understand the meaning of his life when he newly arrived in Egypt, likewise it was difficult for the Jews who were Moses’ contemporaries to understand why their life was so tough in Egypt before God invited Moses to take them out of Egypt to the promised land.

What does it mean by the preparation of the coming of the Saviour?  It means God is in control.  It means there is a purpose in everything.  Everything is a tiny part of God’s grand mosaic.  If you stand just inches away from a grand mosaic, you will see only a tiny part of the whole design and what you can see perhaps is a mess and may not make any sense to you; but when you look at the mosaic from a distance, everything is clear and you will begin to appreciate the artist’s artistic mind.

The clearest proof that there is a purpose in our life came in the person the prophets in the Old Testament had been pointing to for centuries.  He is Jesus Christ, the Son of God, the Saviour sent to the world to save us.  He spoke with His Divine authority that God loves us.  “Are not two sparrows sold for next to nothing?  Yet not a single sparrow falls to the ground without your Father’s consent.  As for you, every hair of your head has been counted; so do not be afraid of anything.  You are worth more than an entire flock of sparrows.”  (Matthew 10: 29-31)

Jesus came to tell us that there is a meaning of our history because He is the Lord and Master of our history.  He is the “goal of human history, the focal point of the longings of history and of civilization, the center of the human race, the joy of every heart and the answer to all its yearnings.”  (Gaudium et Spes, 45, Vatican Council II)

Being Christians with faith, our responsibility is to believe that God is in control even when it does not seem so. 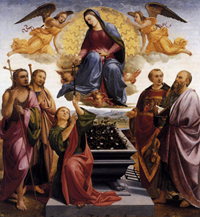 Jesus is the Saviour.  He came to give purpose to our history, but He did not do this alone.  He asked a young woman called Mary from Nazareth to assist Him.  That woman is not another saviour.  She freely consented to give us the Saviour and She freely united Her life and sufferings in union with Her Son.

“I am the servant of the Lord.  Let it be done to me as you say.”  (Luke 1:38)  With Her obedience, Mary became the loftiest creature.  She ended up becoming our heavenly Mother, the queen of angels, and the Mother of God.

On this first day of 2010, as we honour Mary as the Mother of God, we might wish to ask ourselves what she would like to do.  Isn’t it obvious that about two thousand years ago she freely consented to give the Saviour to the world, that today she would be trying her best in every possible way to bring the world back to Her Son?  By our daily life lived in continuous imitation of Jesus and Mary, we can help others realize that God is in control and that there is a purpose in our life.  We all can help Mary, Mother of God, to bring the world back to Her Son.  At the beginning of this year, as we try to plan our resolution for 2010, make it our goal to be closer to the Saviour than last year.  God is still moving the human history forward in a meaningful way.  We all can help because we are part of it.