The Kingdom of Heaven Belongs to Them

St. Dominic Savio is a very unique saint who lived in the 19th century.  He was born in 1842 and died when he was only 14.  Though many people thought he was too young to be canonized, he was considered eligible for his sainthood on the basis of having lived a holy life in his everyday life.  He was the only saint in his age group who was canonized because of his holiness.  St. Maria Goretti was also in his age group, but she was canonized because she was martyred for her faith, not because of her virtues.

She is my youngest friend Cierra.  In the fall of last year, she was sick and doctors failed to find out the cause of her sickness.  I prayed many rosaries for her recovery.  Later she drew me a thank-you card.  On it she said, “Thank you for praying for me.  I love Mary.  You love Mary.  Everyone should love Mary.  Love, Cierra”.  She also gave me a small statue of Mary which can blink as a token of appreciation.  I have written two articles based on her experience.  They are ‘Five over Five’ and ‘The Martyrdom of Mary’.  She was five when I wrote these articles.  Now she is six. 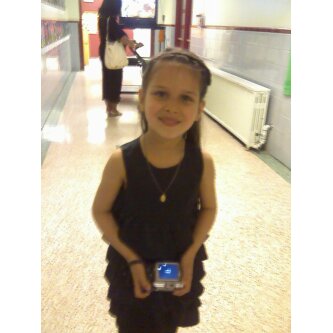 In March my friend Cristina, who is Cierra’s mom, took Cierra to Manresa Jesuit Spiritual Renewal Centre in Pickering, Ontario for morning masses.  This building is also known as Manresa Jesuit Retreat House.  The masses were celebrated in what appeared to be a nursing home for the old and retired priests.  Both Cierra and Cristina enjoyed the masses very much.

After a couple of masses at Manresa, Cierra felt a great desire to return because she wanted to spend time with the six or seven elderly priests whom she had met in the lobby.  On Saturday April 31, Cierra was ready to visit the priests.  She brought some gifts with her – a number of pictures of Jesus and the Holy Eucharist, and in addition to that, she took a beautiful bird house that she had painted and was ready to give it to the priests to hang out in their garden.  It was amazing that this six-year-old girl did not want to engage in her usual age-related activities that morning but just genuinely wanted to spend time with these retired priests.

When they arrived at Manresa, she walked in joyfully and greeted everyone.  With much excitement, she began to distribute her gifts to all the priests who were sitting in the lobby.  Cierra sat down next to Lacy, which is an old dog that belongs to one of the priests.  There was obvious mutual affection between Cierra and Lacy, as it seemed Lacy also enjoyed sitting next to her.

Cierra was very surprised when one priest said he was 89 years old and he liked to jump up and down for fun.  She had a few chuckles with that priest.

The priests just glowed with her presence. They laughed, answered questions, tickled her and embraced the time she was there with them.  Cristina was watching silently as her 6-year-old daughter performed two of the greatest acts of charity: the gift of time, and visiting the lonely.

Before Cierra left, she turned to one of the priests and asked, “Are weeds bad?  My dad says that weeds are bad and they ruin our grass but how can weeds be bad if God made them? God does not make anything bad.”

Cristina was in complete shock with the statement and questions.  The priest was also very surprised that a 6-year-old was thinking about this in this way. The priest looked at Cierra and said, “You are right.  Everything God made is good.  Weeds are not bad.  We are the ones that do not accept them for what they are and where they grow, but weeds are not bad.”

Cierra said, “I knew it. I will tell my dad to leave them alone because I think they’re pretty.”

Cierra walked around and gave every single priest a hug.  There were some who had disabilities and were not able to hug her back, she hugged them anyway.

Cierra has taught her mom and me a great lesson – that one does not have to be a certain age to be charitable and that great things come from simply giving your time selflessly for the benefits of others.

Cristina explained to Cierra how proud she was of her for her wanting to do this on her own, and how much happier Jesus was with her for the love she shared with all those priests who were always lonely and had few guests.

When Cristina shared the above story with me, she said she would never forget that day.  I will continue to pray for Cierra that she will always live in God’s will as she grows up.  Her desire to spend time selflessly with these old priests reminded me that one day Jesus told His disciples that the Kingdom of heaven belongs to the little children.

Some people brought children to Jesus for him to place his hands on them and to pray for them, but the disciples scolded the people.  Jesus said, “Let the children come to me and do not stop them, because the Kingdom of heaven belongs to such as these.”  (Matthew 19:13 – 14)