The More You Honor Me, the More I Will Bless You 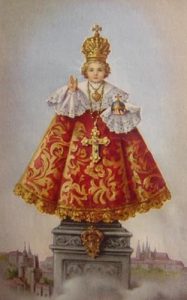 At the back of my own parish church, the Chinese Martyrs Catholic Church, there is a small statue of the Divine Infant. The statue is placed inside a case made of glass. When I think about the Divine Infant, the first thing I remember is His promise, ‘The more you honor me, the more I will bless you.’

As a teacher in Ontario, I spend much time teaching the English language every work day. I teach my students how to increase their comprehension ability. One of the things they need to learn is how to make inferences from given passages.

The history of the Jewish people in the Old Testament testifies the Divine Infant’s promise. Whether they were blessed or not blessed was in proportion to how much fidelity or lack of fidelity they demonstrated to the Lord and His commandments. When they were faithful, they prospered. When they were unfaithful, they had to pay for their defections.

The promise – the more you honor me, the more I will bless you – applies to everyone, including the gentiles in the Old Testament who lived long before Jesus was born. An example can be found at the beginning of the Book of Exodus, the king of Egypt ordered two Egyptian midwives to kill the baby boys and let the baby girls live when they were helping the Hebrew women giving birth. The Egyptian midwives, however, feared God and did not obey the king to kill the baby boys. ‘Because the midwives feared God, he was good to them and gave them families of their own.’ (Exodus 1: 21)

Last month, my friend Fr. James Wan visited Toronto to participate in the celebration of the 25th anniversary of the Chinese Martyrs Catholic Church. When he was working in this parish a few years ago, I always chatted with him about almost everything. When he was in Toronto last month, I had a chance to chat with him again. I told him I was amazed by the story of one particular woman in the Old Testament. Her story echoed the Divine Infant’s promise—the more you honor me, the more I will bless you. This woman was a prostitute. Her name was Rahab. The following is part of the story of Rahab from the Book of Joshua:

Then Joshua sent two spies from the camp at Acacia with orders to go and secretly explore the land of Canaan, especially the city of Jericho. When they came to the city, they went to spend the night in the house of a prostitute named Rahab. The king of Jericho heard that some Israelites had come that night to spy out the country, so he sent word to Rahab: “The men in your home have come to spy out the whole country! Bring them out!”

“Some men did come to my house,” she answered, “but I don’t know where they were from. They left at sunset before the city gate was closed. I didn’t find out where they were going, but if you start after them quickly, you can catch them.” (Now Rahab had taken the two spies up on the roof and hidden them under some stalks of flax that she had put there.) The king’s men left the city, and then the gate was shut. They were looking for the Israelite spies as far as the place where the road crosses the Jordan.

Before the spies settled down for the night, Rahab went up on the roof and said to them, “I know that the Lord has given you this land. Everyone in the country is terrified of you. We have heard how the Lord dried up the Red Sea in front of you when you were leaving Egypt. We have also heard how you killed Sihon and Og, the two Amorite kings east of the Jordan. We were afraid as soon as we heard about it; we have all lost our courage because of you. The Lord your God is God in heaven above and here on earth. Now swear by him that you will treat my family as kindly as I have treated you, and give me some sign that I can trust you. Promise me that you will save my father and mother, my brothers and sisters, and all their families! Don’t let us be killed!” (Joshua 2: 1 – 13)

Since Rahab had honored the Lord and saved the two Israelite spies, later her life was spared. “Joshua ordered the men and said, ‘The Lord has given you the city! The city and everything in it must be totally destroyed as an offering to the Lord. Only the prostitute Rahab and her household will be spared, because she hid our spies.’” (Joshua 6:16 – 17)

On July 22, Fr. Wan celebrated the Sunday Mass in Toronto at St. Agnes Kouying Tsao Church before he returned to Hong Kong. In his homily, he talked about the Colorado shooting as well as the recent gang-related shootings in Toronto. He began his homily by sharing with us that Canada was a very safe country when he first arrived in Canada in 1971. However, as Canada and many Canadians have gradually moved further away from the Lord, such as the legalization of abortion and same-sex marriage, it is understandable that Canada has not received as much blessing from the Lord as before – the less you honor me, the less I will bless you.

What a consoling experience it is to meditate on the promise made by the Divine Infant—the more you honor me, the more I will bless you. We can honor the Lord by nourishing our faith through regular prayers, think about the faith lovingly, live our faith morally, celebrate our faith liturgically, and love our faith by trusting the teachings of the Church in her ordinary and everyday instructions even when those teachings are not easy to live nor popular with the culture around us.