The Sea Will Vanish 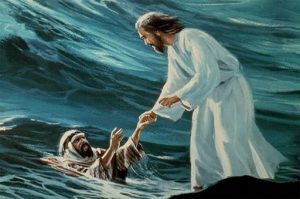 “Lord, I am not worthy to receive you, but only say the word and I shall be healed.”  This is the prayer I always say in my mind every time I have received the Eucharist.  I would repeat this prayer many times after receiving the Eucharist, and gradually, I realize every one needs to be healed by Jesus.

I was invited to go to a healing mass in the evening of April 30, in Buffalo, New York. There were nine of us in two cars.  After the work day was over, we drove to Buffalo.  As we were driving along the Rainbow Bridge between Canada and the United States, the Niagara Falls below us reminded me of the most dramatic healing event in the Old Testament that took place when the Jewish people left Egypt and walked through the Red Sea.

“He gave a command to the Red Sea, and it dried up; he led his people across on dry land.  He saved them from those who hated them; he rescued them from their enemies; not one of them was left.  Then his people believed his promises and sang praises to him.”  (Psalm 106: 9 – 12)

Fr. McAlear, the celebrant of the healing mass, reminded us that we all need Jesus to heal us, whether physically or spiritually, because He is the Saviour.  Fr. McAlear added that Jesus is the source of all healing, and he himself is just a tool to pass His healing to us.

The word ‘gospel’ comes from the old English word ‘godspell’ which means ‘good news’.  The four gospels consist of the good news of the life, death, burial, and resurrection of Jesus Christ.  His activities while on this earth were about our healing, both physical and spiritual.

The fact that the Jewish people walked through the Red Sea was considered God’s victory over the sea.  The sea was created by God, but in the ancient Middle East the sea was a symbol of the power of chaos, danger, and evil that struggled against God.

In the Books of Daniel and Revelation, the sea was the residence of the beasts: “Four huge beasts came up out of the ocean, each one different from the others.” (Daniel 7:3)  “Then I saw a beast coming up out of the sea.  It had ten horns and seven heads; on each of its horns there was a crown, and on each of its heads there was a name that was insulting to God.”  (Revelation 13:1)

Then Jesus made the disciples get into the boat and go on ahead to the other side of the lake, while he sent the people away.  After sending the people away, he went up a hill by himself to pray.  When evening came, Jesus was there alone; and by this time the boat was far out in the lake, tossed about by the waves, because the wind was blowing against it.  Between three and six o’clock in the morning Jesus came to the disciples, walking on the water.  When they saw him walking on the water, they were terrified.  “It’s a ghost!”  they said, and screamed with fear.  Jesus spoke to them at once.  “Courage!” he said.  “It is I.  Don’t be afraid!”  (Matthew 14: 22 – 27)

Jesus got into a boat, and his disciples went with him.  Suddenly a fierce storm hit the lake, and the boat was in danger of sinking.  But Jesus was asleep.  The disciples went to him and woke him up.  “Save us, Lord!” they said, “we are about to die!”  “Why are you so frightened?”  Jesus answered.  “How little faith you have!”  Then he got up and ordered the winds and the waves to stop, and there was a great calm.  Everyone was amazed.  “What kind of man is this?” they said.  “Even the winds and the waves obey him!”  (Matthew 8: 23 – 27)

Today we may ask ourselves the same question that the disciples asked many years ago.  “What kind of man is this?”  To those of us who believe, He is the Son of God.  He is the true God and true man.  All things were created through Him.  He is the Lord of the storm, the Lord of Israel, the Lord of each and every one of us.  Long before He calmed the storm in front of His disciples, He already limited the freedom of the sea.  “It was I who covered the sea with clouds and wrapped it in darkness.  I marked a boundary for the sea and kept it behind the bolted gates.  I told it, “So far and no farther!  Here your powerful waves must stop.”  (Job 38: 9 – 11)

Since He is God, we know that our life is worth living, no matter how many storms have attacked us in the past and how many storms are still attacking us in our daily life.  There are no sins He can not forgive; no problems He can not solve; and no storm He can not stop – whether it be the storm from the devils that have been lurking around us, or the storms created by people we see every day.  Even though He seems to be asleep at the back of the boat, and we begin to feel we are going to drown, and even though He appears to give no answers to our pain, still we continue to hope and trust.

My friend who invited me to this healing mass has been to a number of healing masses before, and with her continuous hope and trust in Jesus, she has felt an obvious improvement after these healing masses.

Similarly, with our unwavering hope and trust in Him, He will stand up and demonstrate His divine authority and calm our personal anxiety and all kinds of problems.  “Quiet!  Be still!”  And once again there will be a great calm.

God’s healing this world will eventually be accomplished once and for all.  Meanwhile, the power of evil will be annihilated.  The sea, which has been a symbol of the power of chaos, danger, and evil that struggled against God, will vanish.