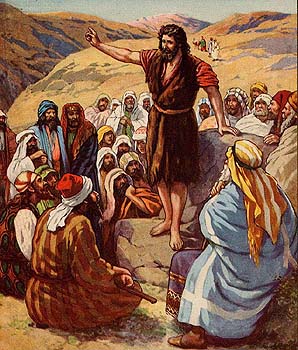 In the Gospels of Matthew and Mark, both John the Baptist and Jesus announced the Kingdom of heaven was near.

‘At that time John the Baptist came to the desert of Judea and started preaching.  “Turn away from your sins,” he said, “because the Kingdom of heaven is near!” ‘  ( Matthew 3: 1 – 2 )

But if the Kingdom of God has already come near, then why do the wicked seem to be doing quite well today?

Jesus responded to that question about two thousand years ago with a parable that we call the parable of the weeds:

“Jesus told them another parable: ‘The Kingdom of heaven is like this.  A man sowed good seed in his field.  One night, when everyone was asleep, an enemy came and sowed weeds among the wheat and went away.  When the plants grew and the ears of corn began to form, then the weeds showed up.  The man’s servants came to him and said, “Sir, it was good seed you sowed in your field; where did the weeds come from?”  “It was some enemy who did this,” he answered.  “Do you want us to go and pull up the weeds?” they asked him.  “No,” he answered, “because as you gather the weeds you might pull up some of the wheat along with them.  Let the wheat and the weeds both grow together until harvest.  Then I will tell the harvest workers to pull up the weeds first, tie them in bundles and burn them, and then to gather in the wheat and put it in my barn.” ” ( Matthew 13: 24 – 30 )

Some may argue that they participate in these activities only for fun or just to satisfy their curiosity.  The Catholic Church, however, teaches us that all such activities are not only sinful, but can be dangerous.  Following the advice of fortune telling, for example, is putting our faith and the authority over our lives in the hands of someone or something other than God.  These seemingly harmless activities can be summed up in one word – occult, which is against the First Commandment – You Shall Have No Gods Before Me.

The Catholic Church’s official teaching related to occult is:

“All forms of divination are to be rejected: recourse to Satan or demons, conjuring up the dead or other practices falsely supposed to ‘unveil’ the future. Consulting horoscopes, astrology, palm reading, interpretation of omens and lots, the phenomena of clairvoyance and recourse to mediums all conceal a desire for power over time, history and, in the last analysis, other human beings, as well as a wish to conciliate hidden powers.  They contradict the honour, respect and loving fear that we owe to God alone.”  ( Catechism 2116 )

“All practices of magic or sorcery, by which one attempts to tame occult powers, so as to place them at one’s service and have a supernatural power over others – even if this were for the sake of restoring their health – are gravely contrary to the virtue of religion.  These practices are even more to be condemned when accompanied by the intention of harming someone, or when they have recourse to the intervention of demons.  Wearing charms is also reprehensible.  Spiritism often implies divination or magical practices; the Church for her part warns the faithful against it.  Recourse to so-called traditional cures does not justify either the invocation of evil powers or the exploitation of another’s credulity.”  ( Catechism 2117 )

There is a worrisome tendency that the children today have become desensitized to the danger of occult thanks to the youth-oriented popular TV shows such as ‘Sabrina, the Teenage Witch’; ‘Buffy the Vampire Slayer’ and especially the Harry Potter movies.

If you think Halloween is a harmless activity for children, then do some research on your own and you will be uncomfortably shocked.  It is dangerously related to Satan.

It is our duties as Catholic parents and teachers to teach the young children that it is extremely dangerous to be involved in activities related to occult.

God has a loving plan for each of us.  The plan is designed to bring us salvation by trusting in Him.  Our fate is determined by how we respond to the will of God.  Our fate should not be determined by the position of some stars, the lines on our hands, etc.  When Adam and Eve disobeyed God, they chose to give power over their lives to Satan.  Their disobedience brought sin and death into this world.  Jesus reversed Adam’s and Eve’s disobedience by complete obedience to the will of the Father.  His obedience brought eternal life for us.  Our duty now is to learn from Jesus – to obey and trust God, and in Him alone.