The Martyrdom of Mary

In another article that I have written, ‘Five over Five’, I mentioned that my youngest friend is a 5-year-old girl whose name is Cierra.

In the last school year when she went to school every day, she had to walk on the sidewalk in front of a church before she arrived at school.  There is a statue of the Blessed Virgin Mary in front of the church.  Every morning when Cierra was there when she was on her way to school, her mom would remind her, ‘Let’s say good morning to Mary.’  After greeting the statue of Holy Mary for many days, gradually Cierra began to love Holy Mary. 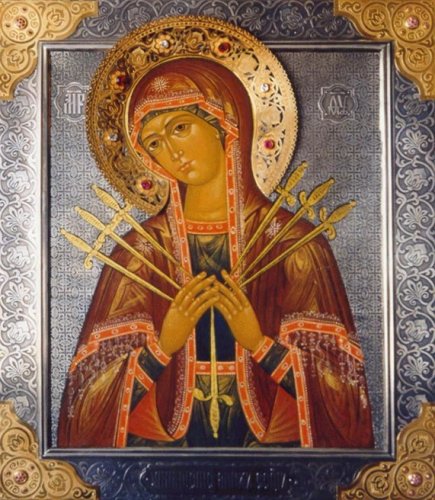 In the second chapter of the Gospel of Luke, Simeon predicted that Mary would have a sword that would pierce through her heart.  He was talking about how Mary would one day use her suffering to help her divine Son to save the world.  Mary’s role of

‘Co-Redemptrix’, which means ‘co-redeemer’ in the English language, has been a long tradition in our Catholic faith but has not been officially recognized as part of our dogma.  Since the beginning of the Catholic Church, we have believed that Mary plays an important role in the redemption of mankind.

Mary participates in the redemption of mankind in three different ways.  First, she obeyed God and so brought the Redeemer into the world.  Second, she united her sufferings to His on the Cross.  Third, she participates in the distribution of the graces of salvation.

The ‘Seven Sorrows of Mary’ are:  1. Presentation in the Temple.  2. The flight into Egypt.  3. Loss of Jesus for three days.  4. The way to Calvary.  5. The crucifixion.  6. The taking down of the Body of Jesus from the cross.  7. The burial of Jesus.  These seven sorrows were part of Mary’s real life experiences.  These were the painful moments in her life.  These seven sorrows were evidence that she somehow participated in the suffering of Jesus to redeem the mankind.

When we are praying the Seven Sorrows of Mary, we are meditating and sharing in the major sorrows of Mary’s life.  We ponder the pain she endured along with her divine Son.  We ask her to lead us to repentance.

The Catholic Church today commemorates the martyrdom suffered by Our Lady on two days.  One is on September 15 when we celebrate Our Lady of Sorrows and the other on the Friday prior to Palm Sunday, the feast of the Seven Dolors of Mary.  The fact that there are two separate feasts emphasizes Mary’s important role in co-redemption, and also reminds Catholics everywhere of Mary’s suffering during the Passion and Death of our Lord, her Divine Son.

On this topic of the martyrdom suffered by Holy Mary, St. Bernard of Clairvaux once said, ‘Jesus died in body through a love greater than anyone had known; and Mary died in spirit through a love unlike any other since His.’

However, it must be emphasized that Jesus did not really need Mary’s help to save the world.  He could have saved the world alone by Himself.  It was God’s desire to involve her in the redemption of mankind.  As a woman was involved indirectly in the Fall(the disobedience of Adam and Eve), God wanted the sins of the first man and woman to be reversed by another Man, and also by another woman (the obedience of Jesus and Mary) as well.

According to the visions of St. Bridget of Sweden (1303 – 1373), the Blessed Mother promised to grant seven graces to those who honour her and draw near to her and her Son every day by meditating on her sorrows and entering into her grief.  The seven promises were:

The above was written a while ago.  Before I post this article on the website, something has happened that makes me appreciate the pain that Holy Mary went through for all of us with a new perspective.

At this moment my youngest friend Cierra is sick.  The doctors failed to find the cause of her pain.  A few nights ago she said to her mom, “Mom , I am tired of having so many pains all over my body.  I just want them to go away.”  Having no medical knowledge herself, Cierra’s mom held her because that was all she could do.  Cierra will be taken care of by medical specialists at the Sick Kids Hospital in Toronto.  Cierra’s mom said, “We are just praying that what they have found in her bone is not cancer or anything life-threatening……………. We are very concerned.”

Simeon predicted a sword would pierce through her heart.  The sword in Simeon’s prediction is still breaking Mary’s heart today.  She is still suffering when she sees so many of her children today have rejected Jesus and prefer to live in the darkness of sin.

Let us continue to pray for the conversion of sinners: ‘Holy Mary, Mother of God, pray for us sinners, now and at the hour of our death. Amen!’

I am one of the administrators of this website.  So far, people who have visited this website are from Ontario, Hong Kong, New Zealand, Australia, Europe, and USA.  It does not matter where you are.  May I humbly ask you to pray for the speedy recovery of Cierra.  Please also forward this article or the link of this article to as many people as possible and ask your friends to pray for Cierra.  At this moment she needs many prayers.  I promise that every day I will pray for those who pray for the recovery of Cierra.

Our Mother in Heaven, your little daughter Cierra is sick.  From her mom’s teaching, she has just started to know you and love you.  She has inspired me to write ‘Five over Five’ and this article ‘The Martyrdom of Mary’.  She was sad when she saw a picture of you being covered with seven swords.  Please ask your divine Son to heal her, just like how He mercifully and miraculously healed so many people.

Hail Mary, full of grace.  Our Lord is with thee.  Blessed art thou among women, and blessed is the fruit of thy womb, Jesus.  Holy Mary, Mother of God, pray for us sinners, now and at the hour of our death.  Amen.