The Story of the Translation of ‘Medjugorje the Message’

There was an inexplicable computer miracle that took place at my home over ten years ago.

My wife is Halina.  Both she and I write religious articles on Fr. Wan’s website.  I write in English and she writes in Chinese.

Halina was injured in a terrible traffic accident in Toronto in September, 1989.  As a result of the accident, she underwent five surgeries; three in 1989 after the accident and two in 1990.  The doctor who was in charge of the surgeries said it was a miracle that she survived the accident. 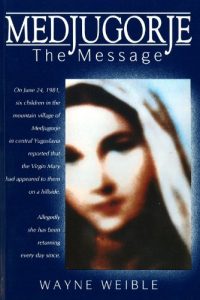 I have been a teacher of the Toronto Catholic District School Board for twenty one years.  There is a Catholic bookstore a few minutes away from where I teach.  I used to go to that bookstore very often during my lunch recess.  One day in 1993, I went to the bookstore and found a book called ‘Medjugorje the Message’ written by Wayne Weible.  I bought the book.  After I had read it, I passed the book to Halina.  Both of us were deeply touched by the book.  I later passed the book to some of my English-speaking coworkers and they were also deeply touched by the book.

After reading the book the second time in 1998, Halina wanted to translate this book into Chinese.  I wrote to Wayne Weible and asked him to grant us the permission to translate it into Chinese, and he gladly agreed.

Immediately we both realized that it was a miracle from heaven.  The message of the miracle was “Don’t give up.  I want you to continue with the translation.”

Although Halina was always exhausted during the process of translation, we both took great pain to finish the translation.  She did the actual translation and I did the proofreading.  Finally, the translation was completed thanks to the encouragement of this miracle from heaven.  As a result, many parishioners in my Chinese church bought the Chinese version of ‘Medjugorje the Message’ translated by her.  After reading her translation, many readers were so interested in Medjugorje that they went there and changed dramatically after the pilgrimage.  They began to pray more often.  Many of them pray the Rosary every day.  Many fast on Wednesdays and Fridays with only bread and water.  Many participate in the Eucharistic Adoration in the evenings from Monday to Friday. 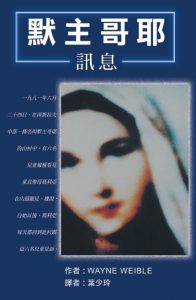 In 2008, I lent the original copy of ‘Medjugorje the Message’ written by Wayne Weible that I bought in 1993 to one of my coworkers.  I told her that she could pass the book to her English-speaking friends.  As a result, this book was passed from one reader to another and it travelled all over North America.  It was read by an unknown number of people.  I was told some readers were so enthralled by what happened in Medjugorje that they finished reading the book in less than two days.  This book, to the best of my knowledge, travelled to different places in USA.  Last year, when Halina needed this particular copy of the book with her own written notes to help her do the second edition of the Chinese translation, someone in Halifax, Nova Scotia was asked to return the book to me.

Both she and I were encouraged by Fr. Gambaro, our former parish priest in Hong Kong, to help preaching the Word of God by writing religious articles.  Now both she and I are writing articles for Fr. Wan’s website.  Her articles are in Chinese and mine in English.  We attribute all these to the computer miracle that took place at my home many years ago.  May the Lord be praised forever.

The online Chinese version of ‘Medjugorje the Message’ can be viewed here: