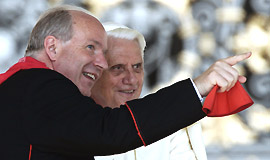 Recalling that his interest in Medjugorje dates back to the 1980s, when Viennese Dominicans were associated with a Medjugorje prayer circle, Cardinal Christoph Schönborn has told an Austrian Catholic newspaper that “without anticipating a definitive Church judgment, I state that the phenomena witnessed in Medjugorje since 1981 have a strong similarity to other Marian apparitions.”

Noting that “all unusual messages are from the beginning suspicious,” the Austrian cardinal said he was impressed that the principal message of the alleged apparitions there is one of peace.

Cardinal Schönborn did not comment on the negative judgments of the local bishop and his predecessor towards Medjugorje. Instead, he said that the 1991 statement of the Yugoslav bishops, “which was at least twice confirmed by the Congregation for the Doctrine of the Faith,” is an “ideal guideline”: “it is not certain that the phenomena are supernatural.” This statement, he noted, allows for the possibility that the phenomena are supernatural.

The cardinal said that the alleged messages of Medjugorje are not as important as the prayer that takes place there, including Eucharistic adoration, the Way of the Cross, Confession, and the daily praying of the entire Psalter. “In order to doubt that into Medjugorje a stream of grace flows, one must shut one’s eyes,” he added, comparing Medjugorje to Lourdes as a place where hearts are transformed.

“What does one learn from the Mother of God? The faith in everyday life! For me Medjugorje is a school of normal Christian life.”.