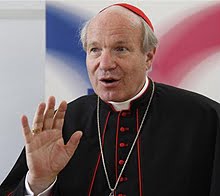 “Dear brothers and sisters here in the Church and on the squares in front of the church and in the yellow hall. We are all conscious of the fact that it is a big privilege to not have to celebrate the New Year with champagne.”

The crowd laughed, and the Cardinal added “Maybe later,” which was followed by laughter and clapping.

He continued: “But now we are allowed to celebrate the beginning of the New Year with Mary and Joseph and with the child that is lying in the manger and with the shepherds. These days, we have all come to Medjugorje to be especially close to the mother of the Lord. To be more exact, we have to say that we have come here because we know that the mother of the Lord wants to be close to us.

“With her, we want to begin the New Year. And the first thing that moves me when I think about the manger and the shepherds is that there were no angels present. Although here there is an angel at the nativity set, but in the gospel there are no angels waiting there. They were on the field with the shepherds… an entire host of angels. But Mary and Joseph only heard about it. The shepherds told them.

“We also didn’t see the Gospa. But there are people here who told about it. And we trust that the Mother of God really is close to us. Belief comes from hearing. And it impresses me that first, in the gospel of today, there is talk about hearing. We have to listen to the good news first. We have two ears, two eyes, and only one mouth. That means we have to listen much, watch much, and then talk also. And what are we supposed to say? We are supposed to report what we have seen and heard. The world needs a new evangelization and that is only possible through people for whom it is impossible to keep silent about what they have seen and heard.

“How can we be witnesses of the good news? First, by looking to Mary. Mary kept all that happened in her heart and pondered it. Brothers and sisters, what we need most in this time is prayer. I’m saying this with a sadness of some sorts. I know that I’m praying not enough. I know that prayer is life. Without the living relationship with God our life becomes dry end empty.

“What does the Mother of God tell us all the time? Pray. Take yourself time for prayer. Is that a good resolution for the New Year? For us priests and deacons. For us all. Time for prayer. It gives so much strength and so much joy. So much clarity. Let us ask Mary that she helps us to pray more. When we pray our word is also filled with life. And then our testimony is credible.”

“I want to tell you something about what the Apostle Paul told us. The Year of Paul is already over, we are now in the Year of Priests. But the word of the Apostle Paul was so strong because it was filled with life. In the reading of today he talks about God sending his Son so that we can become sons. The daughters are not excluded here. Daughters and sons are meant together. But Paul says we are called to become sons, not slaves. Like Jesus is Son of God we are supposed to be allowed to call God Father. In the beginning of this year the Apostle Paul tells us: You are sons and not slaves.

“I believe Medjugorje is a place where a lot of people confess. Confession is deliverance from the slavery of sin. Nothing makes us less free than sin. God wants us as sons: Freedom of the children of God. And for that he gifted us with the sacrament of reconciliation. We are to have a new relationship with God, to be allowed to call him Abba. Jesus invited us to that in a way that we trust Him, that we trust God. There is so much fear of God in us (or, “we are so afraid of God”).

“Trust can be heroic sometimes, if life becomes difficult. If a marriage becomes a burden, if an illness oppresses us, if we don’t know what becomes of our work; then to say Jesus I Trust in You; that can be heroic. Trust; that really is an act of faith. And again we look to Mary. Who has made and gave this act of trust, of faith, more than Mary? Jesus I Trust in You. That is to be our program in the coming year.

“And a last word: The shepherd returned, praised God, praised him for what they heard and saw. We, too, will return home. In order that we can become witnesses of the gospel, we have to praise God first. The shepherds praised God for what they have seen and heard. I hope that we can all drive home, travel home after these days here and praise God for what we have seen and heard. Then people will also believe us when we tell, then our word will be credible.

“Now it is almost midnight. It is exactly the right moment to profess our faith. With this faith we are going into the New Year. God bless this year.”